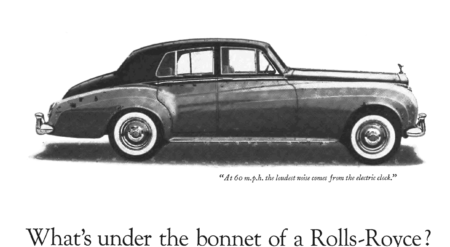 “What’s Under The Bonnet of a Rolls-Royce?” Ad by David Ogilvy

"What's under the bonnet of a Rolls-Royce?"

By far, this was the longest ad Ogilvy did for Rolls-Royce. The first three pages below are from a three-page spread that ran in The New Yorker in 1959. The fourth...View More page is a full page ad with the same copy that ran in the Chicago Daily Tribune that same year. They had to break the copy down into 5 columns & minimize the font-size to fit it all. What made this ad longer is that Ogilvy didn't necessarily create new, different copy, but assembled copy from multiple ads into one. You'll notice this after looking at other Rolls-Royce ads we have on the site. Of all the ads from this campaign, this one was the most curiosity-driven, due to the question-based headline. As I point out in the "11 big takeaways for this campaign", Ogilvy reworked a lot of the same copy into different ads, but switched up the angle. Like his "A Guide To Rolls-Royce Comfort & Graces" headline, this one is very non-direct & comes across like an article. Overall, this is an excellent example of how Ogilvy reformatted & repurposed his copy, which worked very well. “What’s Under The Bonnet of a Rolls-Royce?” Ad by David Ogilvy