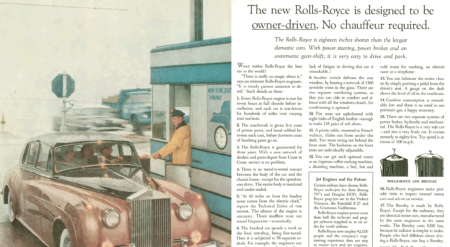 "The new Rolls-Royce is designed to be owner-driven. No chauffeur required."

At the time, Rolls-Royce was known for being a high-class car often driven by a chauffeur. In this ad, Rolls-Royce sought to bridge...View More a feeling of luxury & status with the idea of the car being "owner-driven" & available for casual, everyday use. Mentioning that "no chauffeur is required" frames the car as one that is worthy of a chauffeur, but shouldn't need one. Ogilvy follows this lead with a list of 17 remarkable facts about the car - this same body copy was used in many of his other ads including the famous "At 60 miles an hour the loudest noise in this new Rolls-Royce comes from the electric clock." ad.