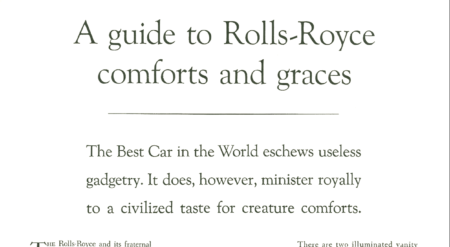 "A guide to Rolls/Royce comforts and graces"

This was a two page ad that ran in the New Yorker in 1960. Of all the ads in Ogilvy's Rolls-Royce campaign, this one probably does the best job of flying under...View More the radar & coming across as an editorial. "Guide To..." is a great headline starter for those into native advertising. The ad is also a powerful example of how to sell luxury. What Ogilvy is primarily discussing in this ad are tiny, minute details & little-known features that make the car special & unique. It's these extras & non-necessities that the rich & wealthy splurge on beyond the core qualities of the car like it's look & build. This ad (& the entire campaign) is a must-study for those selling custom-made or specially assembled items.